Sneak a peak now – Look for Wireless in the menu

Launching Q3 in selected regions – Keep an eye out

DALI employs a digital transmission signal which makes it less prone to the transmission errors that typically affect analogue control signals. Unlike the older 1-10v analogue systems or the propriety DSI systems the DALI signal allows for Bi-Directional Communication which creates the ability to obtain functionality results directly from the DALI device.

Below you can see DALI devices, these can be ballasts, transformers, LED controllers or emergency devices compatible with DALI. Up to 64 DALI devices can be connected to a line. Sensors, switches, groups or scene controllers can be connected anywhere on the DALI line. These are optional devices. A DALI power supply is required for every DALI loop and a DALI controller, or gateway, allows control of a DALI line. The DALI protocol allows for multiple controllers per DALI loop. Also these devices are optional. 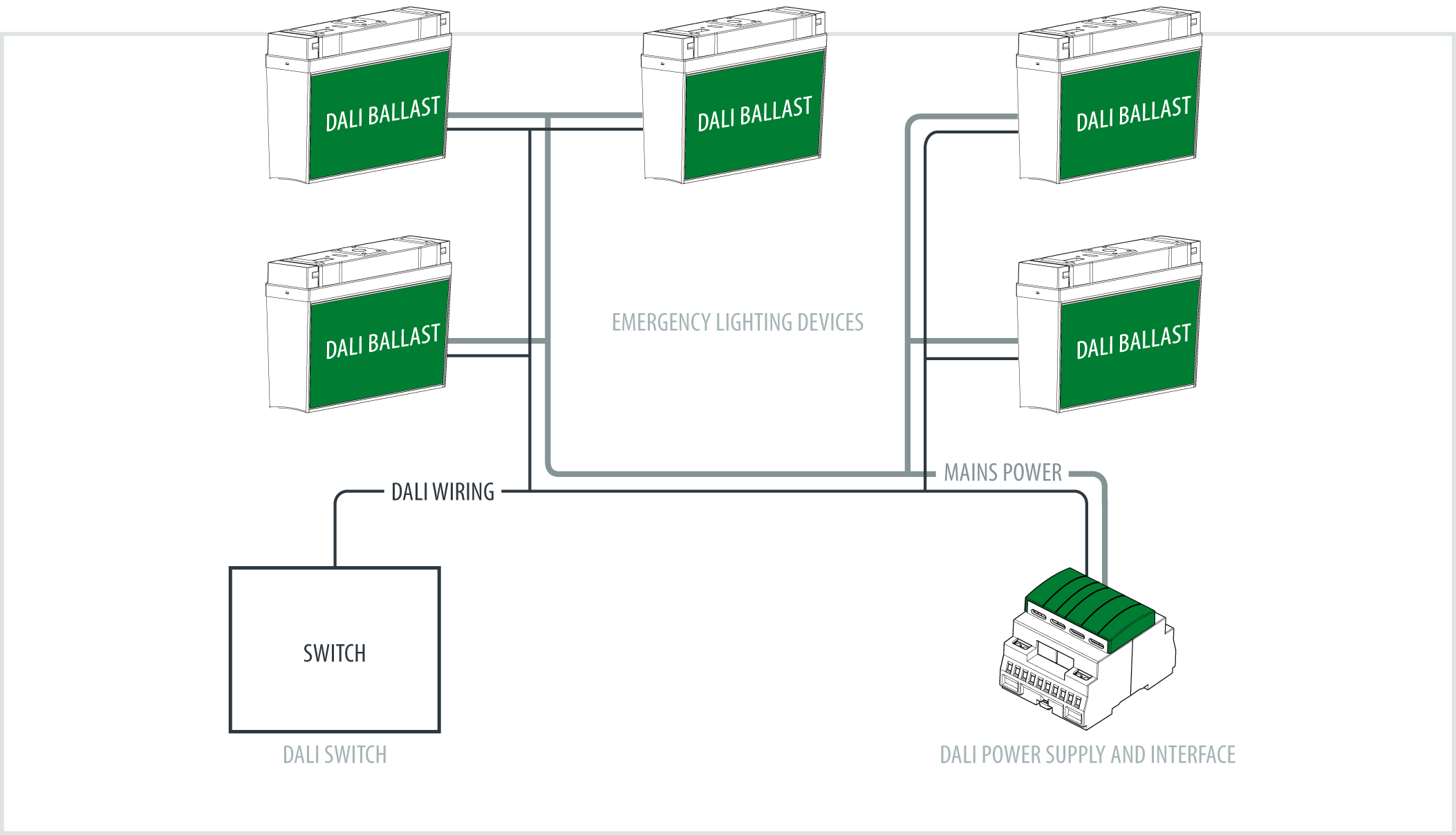 DALI wiring refers to the two cables used for the DALI signal. These wires are 240V rated and can be run next to the mains power cables

Each DALI device has its own address which enables individual communication and control over a single DALI line. This means that you can wire up to 64 DALI devices together and control them separately, whereas traditionally you would need to wire each device separately. Individual control provides the means to gain the maximum power savings and comfort. HINT: Think of a command as a letter sent via the post. Only the person it is addressed to will open and read the letter.

Individual control is exploited through a broad range of queries/commands, listed below. The feedback from the device provides the perfect method for minimizing maintenance costs of the building while ensuring a safe working environment.

As well as individual control, DALI also supports two new concepts called Scenes and Groups. These concepts allow for the control of several different DALI devices with the use of one command.

There are 16 different scenes available for each DALI line. When a scene command is sent across the DALI line, every DALI device receives the command and checks it’s memory. If it has a stored action the DALI device will perform the action, otherwise it will ignore the command. 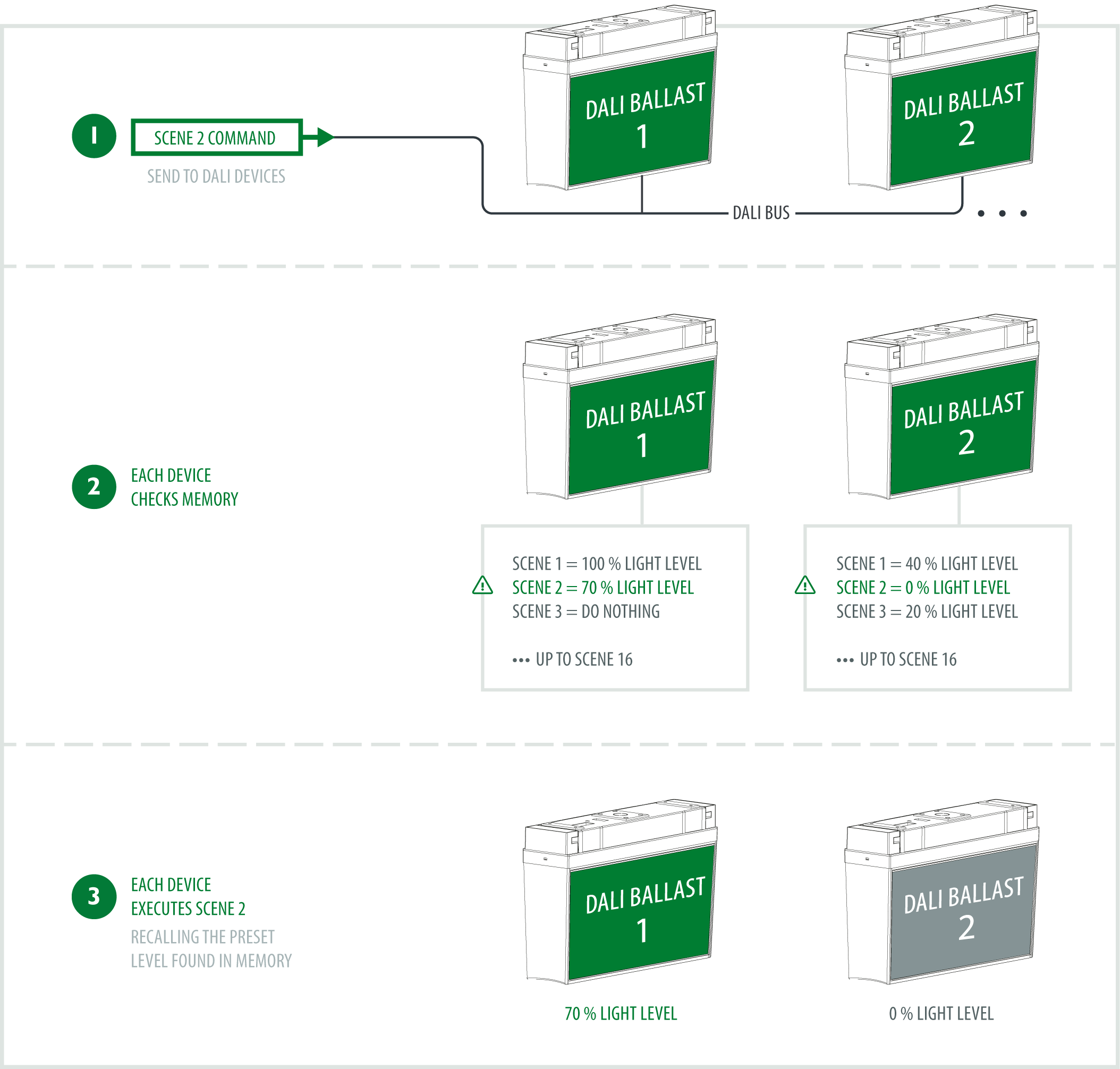 HINT: Think of a scene as a setting; for example in a meeting room you may want the lighting to have different settings for different tasks (meeting, presentation, video presentation, lunch)

Groups allow multiple DALI Devices on the same line to be grouped together which allows the devices to perform an action together.

Each DALI device can be assigned membership to a group or multiple groups. This grouping allows commands to be sent out in groups with all members of the group reacting to one individual group command. If a device is not part of the group it will be ignored.

HINT: You can group devices together into rooms or areas to perform functions easier

NOTE: Traditional systems of lighting control do not always understand the application of groups and scenes. Many systems originally used each DALI device as an individual lighting channel, which is a slow and messy method. If you have ever seen a room of lights turn on one by one, then this is most likely a system which uses channel control and not group or scene control as was designed into DALI.  Some system providers will also say that DALI’s communication speed is slow, this is normally because they have taken the channel approach to DALI.

For example, if we compared a channel based system to a proper DALI control of a group of 20 light fittings, the channel based system would have to issue 20 individual commands, where the correct method would use one group command, achieving the goal 20x faster. It is recommend when selecting a DALI control system, that you ensure you decide on one which fully supports DALI groups and scenes (you would be amazed how many system providers still do not use the correct method, and blame their poor implementation on DALI.)

Because of the localised intelligence within each DALI device, it becomes possible to turn the DALI device on or off directly from the DALI control system rather than using a mains switch. This brings greater functionality and allows for flexibility and change after installation.

Moreover, changes can be made to scenes and functions through simple programming without the addition of any new hardware

DALI devices have a number of features which can be changed to adjust the operation of the device. Some features are listed in the following table.

This website makes use of cookies, including third party ones. By keeping on browsing this website, closing this banner or clicking on whichever other part of the website page outside this banner, you consent to use of such cookies. Find out more.